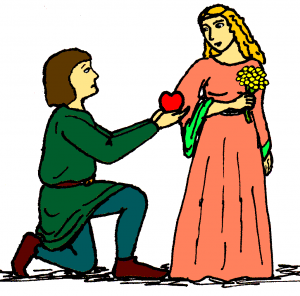 (See an English discussion of the topic here)

Germans are not generally known for “beating about the bush” but rather tend to put things bluntly. And yet we know that it’s not always clever to criticize someone openly, especially if the receiving person is someone you don’t want to offend. This is when we choose the following approach:

durch die Blume sagen (literally: to say through a flower)

Meaning: to voice criticism in a diplomatic, friendly or polite way

A popular, although mistaken, explanation locates its origin in the language of flowers as it was used during the 18th and 19th century in Victorian society. Brought from Istanbul to England by Lady Mary Wortley Montagu, this language assigned particular statements to particular flowers, allowing young men and women communicate nonverbally at a time when societal rules made it very difficult for them to talk openly. This, however, is a Victorian custom, which never quite made it to Germany. Rather the idiom derives from a different kind of flower language which traces back to the Middle Ages and courtly society. When a nobleman courted a noblewoman and she was not interested, she would give him an everlasting flower to let him know this. Thus the spurned lover could withdraw before experiencing a more humiliating rejection.

“Durch die Blume sagen” almost always refers to some kind of criticism or rejection and requires striking the right tone of voice. There is no corresponding English counterpart, so the best way to translate it is by describing it. The common translation, “to say something in a roundabout way,” is an approximation, which, I think, falls short. It’s true that, like the German expression, it stands for an indirect approach which keeps the main point vague. Unlike the German expression, however, roundabout speech suggests being overly complicated or wordy whereas saying something “durch die Blume” can be very direct and succinct. Its main characteristic is that it puts the negative aspect into friendly, polite or diplomatic words.

For example, your actor friend invites you to the premiere of his new play. You hate it, but don’t want to offend him. So you could say: “That certainly was an unusual interpretation of the play. I don’t think I’ve seen anything like it.”

Fun fact: If your actor friend understands the criticism, he could simply respond: “Danke für die Blumen!” (Thank you for the flowers!)

The opposite of “durch die Blume sagen” is “etwas unverblümt sagen” (literally: to say something without flowers)