The English language boasts a wide range of idioms taken from literary sources, particularly Shakespeare. Similarly, the German language includes a vast amount of phrases taken from the likes of Goethe. In contrast to idioms derived from customs, which frequently have an equivalent in the other language, such common citations typically stand on their own. Hence, they often resist translation and must instead be rewritten. Let’s take this one:

Gretchen is a central character in Goethe’s tragedy Faust. A young girl from a humble background, deeply religious and innocent, she is the opposite of the eponymous scientist, who is much older than her and renowned, but also disillusioned by the world and his studies. Having made a deal with the devil, Faust enlists the latter’s help to seduce the girl and make her his mistress, which then leads to tragedy. In one of the key scenes, Gretchen asks Faust: “Now say, what is your way about religion, pray?” Faust tries to evade the question, but Gretchen gathers from his unwillingness to give a straight answer that he is not a Christian.

Since then, “Gretchenfrage” stands for a particular type of question by which you try to find out about someone’s attitude toward religion, morality, politics or any topic which is of great importance, which may even include football (we are talking about Germany after all…). Notably, the question always assumes that the person asked does not really want to answer it. Hence it is always blunt, so that avoiding an answer inevitably gives away the truth regardless. In fact, it typically mimics the structure used by Gretchen: „What is your way about…?“
If you need to translate the idiom into English, the best way is to rewrite it into a direct question, such as:

What is your attitude toward / your stance on / disposition to…?

Of course, you could copy the structure, but, lacking the context of Goethe’s tragedy, this will come across as too stilted.

Oftentimes, “Gretchenfrage” is confused with “Fangfrage” (literally: a question to catch you out). A “Fangfrage” does the exact opposite of a “Gretchenfrage”: Rather than being direct, it implies a wrong answer or an answer by which you will contradict yourself.
“Fangfrage” is also quite difficult to translate: Its concept is best captured in the American term “gotcha-question”. Its most common translation, however, is “loaded question”, which may indeed be completely off mark. A loaded question is not so much charged with an answer, but with an assumption, typically a negative one. It tries to get a person to either contradict herself or to disclose something that is disadvantageous to her. A “Fangfrage” can fulfill the same purpose, but it can also be a comparatively harmless attempt to elicit information, to check if you pay attention or to test your reasoning. As such it is better translated as “trick question”. So you really have to be aware what the question is trying to achieve before you choose your translation or you may insinuate more than intended. 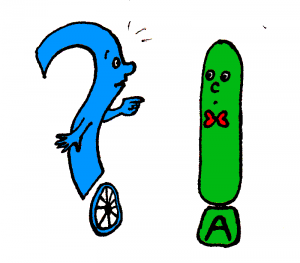 For an English discussion, go here.