To continue my exploration of German and English idioms and their translations, I have chosen an idiom that exists in similar form in both languages:

auf den Busch klopfen (literally: to beat on the bush)

It is no doubt tempting to translate it with the English idiom “to beat around/about the bushes,” but its meaning corresponds to a completely different English idiom: fishing for information. 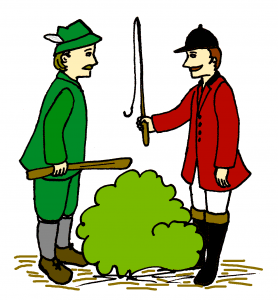 The origin of both “auf den Busch klopfen” and “to beat around the bushes” is the same and can be traced back to hunting. Before the actual hunt started, assistants were sent out to beat around the bushes to scare out any animals and birds hiding in there. But the surviving metaphorical meanings went into two different directions: The German expression emphasizes the beating’s function of finding out whether there is any game hiding in the bushes. The English expression points to the beating as a preparatory action. It was a lot of to-do before the main event, the hunt, started. From this derives the meaning: to delay or avoid talking about an issue at hand

The German idiom for “beating about the bushes” would be: um den heißen Brei herumreden (literally: to talk around the hot mash).